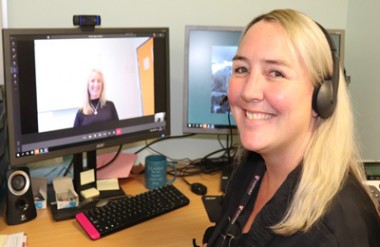 Dr Michelle Downie has been using telehealth since the beginning of the pandemic last year and says delivering health care remotely has exceeded her expectations.

“I was initially unsure if I could do it successfully, but after a good six months of using telehealth consistently, I found there were only a couple of follow up patients who I really needed to see in-person subsequent to their remote consultation. I was surprised there was such a low proportion of people where I couldn’t do what I needed to do over a phone or video call.”

Dr Downie, a Southland Hospital General Physician and Endocrinologist, says the majority of feedback from patients has been “really positive”.

“Endocrinology is a specialty that is particularly suited to Telehealth. It works especially well with follow-up patients, as you usually know each other or have met before and are often just checking in to review treatment plans and test results.”

A follow-up consultation by telehealth also often means patients can be seen much earlier by their consultant than an in–person appointment and has the obvious advantage of reducing travel time for patients, she says. “Because we are based in Invercargill, it is such a big geographical catchment so it’s a lot of driving for people. For example, patients in Queenstown would previously make a four-hour round trip, potentially for just a 20-minute follow-up appointment.”

Using telehealth is a huge advantage for rural patients, as there’s no need to take a day off work or travel. “Even for those who live closer, most of them are happy to find a quiet room and take 20 to 30 minutes out of their work day for a video call, rather than the time it would take to get to the hospital, find a park, and sit in the waiting room until they get called up. This is what many patients tell me they appreciate the most.”

Dr Downie says telehealth has also changed the appointment model for clinicians, so it’s now more flexible and manageable to be able to fit into smaller blocks of time. Another advantage is the ability to include patient’s family members in the session. “This works really well via video conference, as they may have family who want to be involved in the appointment, but they live elsewhere in the country. It also means other health care providers can be involved in the call if they want to, which is great.”

Southland Hospital is also about to launch regional MDM telehealth clinics for patients with Type 1 Diabetes in Queenstown. This is just one example of attempts to further expand Telehealth services in the region.

The use of telehealth means less disruption to health care in general, regardless of lockdowns and current community restrictions. “An increasing amount of people are using video calls and video conferencing as it becomes more commonplace both in the workplace and socially,” says Dr Downie.

“We use a mixture of video and phone calls here. I think video calls work better than phone calls if you haven’t met someone before – after that we give the patient the choice. Roughly a third choose a video call and about two thirds are happy for a follow-up over the phone. Different people have varying degrees of comfort with technology, but it’s still surprising who chooses video sometimes. My mum is in her 70s and she capably uses and prefers video consultations.”

The main disadvantages of telehealth include not being able to physically examine patients, technology issues such as bad internet connection, and no reassurance from reception for patients in a virtual waiting room if the clinician is running late from another appointment.

Initial rapport building for new patients could also be a theoretical disadvantage, says Dr Downie. “It’s always better to meet in-person for the first time, but I think as you get more comfortable with using the technology, it’s possible to overcome that and still create a good initial patient-doctor rapport over video link. People are becoming more used to it and it gets easier and easier.”