Tuberculosis (TB) is a serious and potentially life threatening disease but one that is highly treatable. The treatment involves people taking multiple antibiotics every day for at least six months and, in some cases, up to two years.

As the treatment involves several medicines, which may be not well tolerated by the client, and the treatment has to continue over a long time when the client may no longer have any symptoms or be infectious, there is a high risk of poor adherence to TB treatment.

Poor adherence means the client fails to take the right medicines, in the right dose, at the right times, or fails to complete the medication course, resulting in treatment failure. Inadequate or partial treatment of TB increases the risk of new drug-resistant TB strains arising, as well as not curing that particular person’s TB, therefore posing a potential a risk to others in the community.

The World Health Organization recommends Directly Observed Therapy (DOT) as the best way to treat people with TB. This means that someone (usually a health care worker) observes the patient swallowing every dose of their TB medicines. In New Zealand, this involves public health staff visiting patients (usually daily) to provide DOT. The Public Nurses also provide support and encouragement, and monitor clients for side effects.

Auckland Regional Public Health Service (ARPHS) is responsible for the supervision of TB treatment, including DOT, in the greater Auckland region. The public health nurses and public health assistants provide this service. However it is resource intensive due to the time taken to reach clients across Auckland’s wide geographic spread during times of peak traffic congestion.

Setting up the TeleDOT Foundation Project

Dr William Rainger, Service Manager and DOT Telehealth Foundation Project lead says “The opportunity came up to apply for some Foundation Group one-off funding that Auckland DHB was offering to develop telehealth initiatives. As we are always on the lookout for innovations that can help us work more efficiently, we put in a bid for funding to set up a TB DOT telehealth pilot, which was successful.”

“We had to think and plan carefully for how we would set up a remote DOT service that would get staff buy in, patient acceptance and compliance and save public health nurse’s time. Travelling to patients’ homes in Auckland is very expensive in staff time as a 15 minute drive, can take 40 minutes when the traffic is bad. The visit may only be 20 minutes long but it means that our nurses spent more time travelling than actually using their skills with patients.”

‘We based our pilot on the learnings from two other TB DOT pilots run in British Columbia and South Australia. The Foundation funding process meant that we had to have rigorous project management principles, documentation and reporting in place before we started which continues to this day. We took five months to set up the pilot so that by March 2013, we were ready to recruit clients. ”

“We deliberately started on a small scale with two patients. Many pilots start on a big scale with great vision and enthusiasm and then fizzle out as there is not enough effective support or processes in place. We wanted to be successful and have the ability to evaluate each step as we went so we could refine what we were doing, especially in what technology was working or not. The robust project management and formal project structure also gave us the confidence to deliver what we have said we would do. We believed if this pilot was effective, it could be used more widely in community care and primary services.”

“Our staff were key to the success. The nurses were selected for their skills and expertise in working with TB patients and their enthusiasm in trying a new approach to providing DOT.” 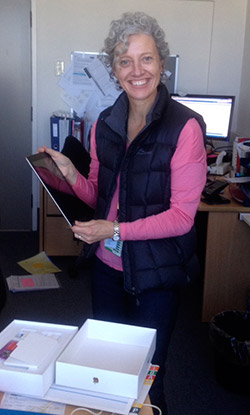 Carolyn Pye was one of the Communicable Disease Control Team’s public health nurses selected to be in the pilot and now co-ordinates the TeleDOT as a business as usual service.

“My role is to further develop the project plan, go out to clients’ homes and download an app onto the client’s desk top, laptop or iPad/tablet, promote the project and train the public health nurses and public health assistants in the use of the telehealth technology.”

“I have trained Regina, one of our public health assistants to do TeleDOTs. Regina starts at 7am and by 10am she has completed twelve TeleDOTs. This releases more time for the public health nurses to concentrate on the responsibilities associated with case management and contact tracing of TB cases and other vaccine preventable diseases.”

“Not every client is a suitable candidate and we apply selection criteria before approaching a client about going onto TeleDOT. We have had a total of 31 clients on TeleDOT since early 2013. Of these, 11 were recruited as part of the pilot project and the remaining 20 have been recruited under the rollout to business as usual (from Dec 2013). Currently, thirteen clients are on TeleDOT. The average length of time, clients have been on TeleDOT ranges from five weeks to 36 weeks.”

“During the pilot project, we had to use special phones with a small screen, provided by Vivid, and installed into the clients’ house by Chorus. It was difficult to negotiate a mutually agreeable time for installation between the client, Vivid and Chorus and it could take several hours for the installation to be up and running,” says Carolyn. 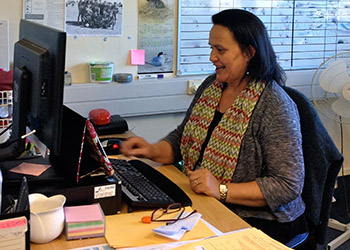 “About six months into the project, Vivid developed some software and from then on I was able to go to the client’s home and download the app onto the client’s desktop computer, laptop, iPad or tablet, which made it much easier. However some of our clients do not own their own computer, so we recently purchased eight iPads which we loan to clients for the duration of their treatment to enable them to have TeleDOT.

Until recently we had not downloaded the app onto smartphones as we thought the screen size was too small for clear picture transmission. However, in the past two weeks I have downloaded the app onto the iPhone of three clients and we have been surprised at the clarity of the picture and will continue to offer this to clients who own iPhone5 or android phones such as Samsung Galaxy Note 3. So there have been new developments all the way along.”

People with extra-pulmonary TB are not infectious, and people with Pulmonary Tuberculosis on antibiotic treatment are no longer infectious after about two to three weeks of treatment.

A couple of weeks after leaving hospital, Sonya, a client, was able to return to her work in the hospitality industry but she still needed the DOT visits. It used to be a hassle for Sonya to have a public health nurse knocking at her door at 7.30 each day.

“I work shift work so I would feel a bit stressed if the nurse was late because of traffic and I had to get to work. I also had to make sure I had had breakfast before the nurse came. As I have different shifts, I had to ring the nurse every day to set up the visiting time for the next day. I had to be home so the nurse could visit me to see me take the medication correctly.”

Sonya who is in her early twenties is really good with IT and uses her own iPad a lot to Skype friends and family. When Carolyn asked her about being part of the DOT telehealth pilot, she was very keen. Setting up the system was made easier by having a partner who works in IT.

“This system needs people to be reliable so it’s not for you if you can’t take your medication regularly. I am an obedient patient anyway, but it gives me more flexibility,” says Sonya.

“It’s really easy to use and I like it because it doesn’t waste time for either the nurse or me and I can be anywhere and take my tablets. DOT Telehealth is similar to using Skype.”

‘Once I had WiFi problems at home, so I went to work and logged into the work WiFi. I texted Regina to say where I was and to log on and the DOT was over in less than five minutes,” says Sonya.

Public health nurse Carolyn says that TeleDOT is far less intrusive than going to a client’s house early in the morning. The client has more input into the timing of their teleDOT session and far more privacy. They also have a greater sense of autonomy and have far more control over their health management.

“TeleDOT means that a difficult medication management pathway is made easier. I have one client who is a university student so I used to meet her outside the university. She would sit in my car and take her medicine. She was the first person to use one of our new iPads with the TeleDot software loaded. On day one, when she took her medication in the student café using TeleDot, it was the first time I saw her smile.”

Things that made the TeleDOT pilot succeed